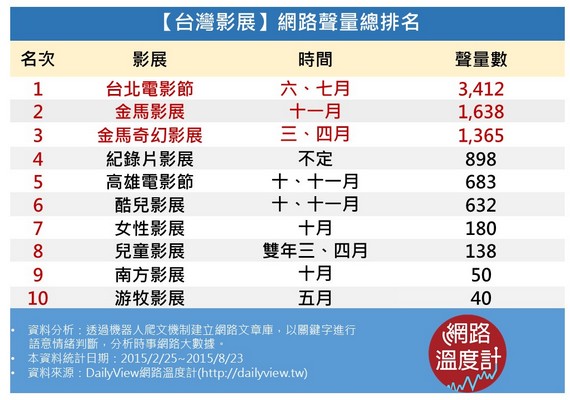 Urban Nomad is held every year in May, and this year toured to Hsinchu and Taichung in June. It’s unfortunate they weren’t also able to connect with film fans in south Taiwan. Urban Nomad is a festival for those who enjoy the singular and quirky, with an annual film lineup that is always unique. Though the number of films is not large, over the last 14 years the festival has cultivated a core of loyal fans. Beyond films, Urban Nomad also incorporates music performances, installation art and other media, giving everyone a comprehensive means of participation, which is to say that aside from watching movies, you can also get your party on. Though ranked 10th, Urban Nomad’s film lineup is truly first rate and well worth appreciating.  Films generally address the freshest subject matter, and most come with good festival pedigrees. But different from the Golden Horse, the festival has its own sense of taste. So if you feel like you are getting the same old same old from the Golden Horse or Taipei Film Festival, Urban Nomad can broaden your film-watching horizons.

You can read the entire article here, including the full rankings (Chinese only): http://dailyview.tw/Daily/2015/08/29