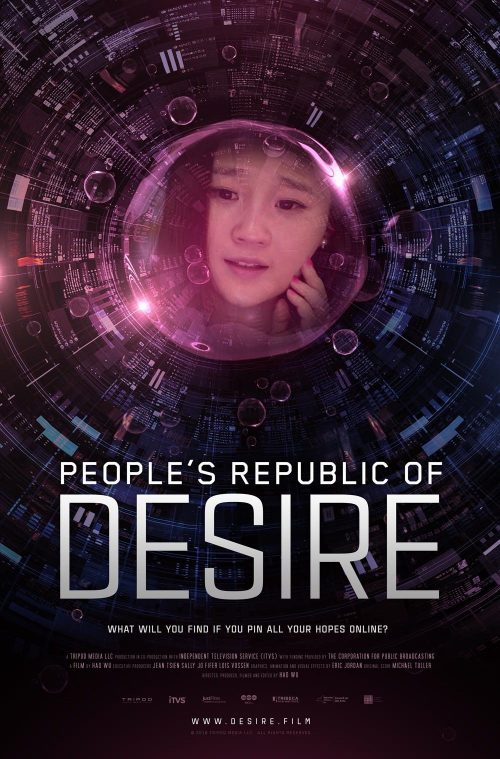 “Hypercharged… about technology and its discontents.” –– The New York Times

“Provocative and unsettling… it brings us on a guided tour through the digital marketplace for something resembling human contact.” –– Variety

“The warp-speed change of Chinese society, fueled by urban migration and the insidious lure of technology, has helped create a generation of lonely youths who are either the haves or have-nots. The virtual world is supposed to be their solace, but it only reinforces their isolation.” –– San Francisco Chronicle

Truth is indeed stranger than fiction in China’s live streaming industry, and this documentary takes us deep inside this eerie and dystopian world. Live stream hosts can earn as much as $150,000 a month singing, dancing and doing live talk shows to interactive audiences of tens of thousands of Chinese netizens. Their channels are produced in cubicle sized studios, often inside live stream farms run by major internet companies. Bosses line them up and send them to work in scenes reminiscent of a mama-san running a Chinese brothel. The industry purportedly has 433 million viewers, and earned USD 4.4 billion revenues last year.

Fans of live streaming include China’s super rich, who each night lavish virtual gifts on their favorite performers (40% of the money paid for these gifts go to the performers), and the dirt poor, many of them migrant workers in urban areas searching for a cheap way to be entertained, to feel connected. The film follows three young live-stream celebs –– a singer, a comedian, and a migrant worker –– as they search for fame, fortune and human connection in live streaming. We also meet their families, those managing the online talents, and those with money who control the fate of these talents, behind the scenes much like the Wizard of Oz. The story culminates in the bizarre annual online idol competition, in which the rich can buy unlimited amount of votes for their favorite performers. There our characters realize that money alone pulls the strings in this virtual universe, and human connection and personal happiness remain as illusive online as in our real and broken world.