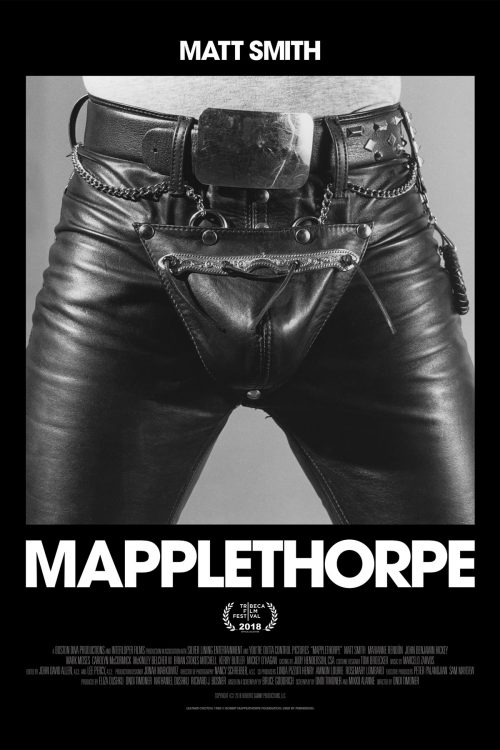 Directed by Ondi Timoner, the only two-time winner of the Sundance Grand Jury Prize for documentary

This biopic on the provocateur photographer who captured New York’s hardcore gay scene in the 1980s opens a new window into the life of a man who was undoubtedly one of the icons of the queer revolution of the late 20th century. His pristine black-and-white photographs of hardcore BDSM subculture and gay sex acts provided an aesthetic for New York’s downtown gay scene that flew in the face of a society that largely denied gay sexuality. When his pictures finally made it to public museums in 1989, they shocked the America, creating immense debate about art, morality, and what can be said and shown about gay sexuality in public.

This is the first dramatic telling of Mapplethorpe’s life, and the first narrative feature from director Ondi Timoner, the only two-time winner of Sundance’s Grand Jury Prize for documentary. The film begins with college dropout Mapplethorpe living a New York bohemian life in the Chelsea Hotel with his girlfriend the eventual punk icon Patti Smith (his one and final opposite sex relationship). From there Mapplethorpe, played by Matt Smith (Doctor Who, The Crown), first dabbles, then wades and finally dives in to New York’s gay scene. His art progresses from collages to Polaroid sex photos (sold to discreet patrons) to his later gorgeous, pristine and infamous fine photography. These defining artworks were obsessed on the one hand with gay eroticism and on the other with stark formal beauty. Mapplethorpe’s life and work coincided with the arrival of HIV/AIDS, which claimed both his own life in 1989 as well as the lives of many who sat for his portraits. This film for the first time tells the story of the man behind the art and the controversy.