Far: The Story of a Journey Around the World 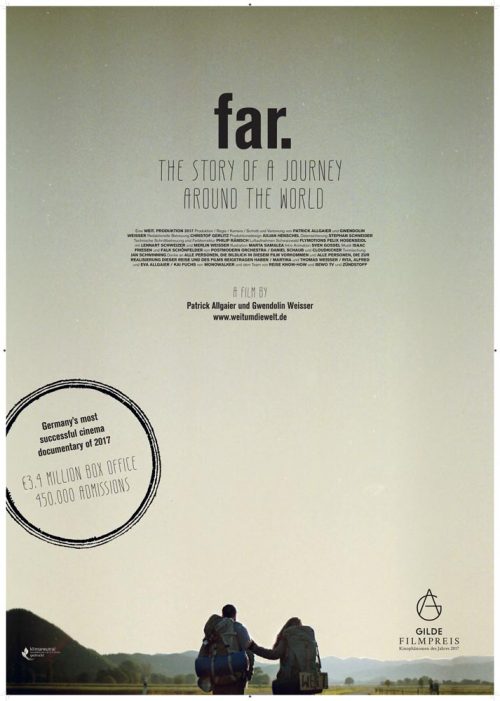 Far: The Story of a Journey Around the World

“More than anything it makes you feel hopeful. In this day and age it is the perfect answer to distrust, fear and xenophobia.” –– Christof Gerlitz, SWR Television

“An homage to humanity.” –– Badische Zeitung

“This film had no marketing budget, no advertising schedule, no subsidies… When has a phenomenon like this ever hit our cinemas before?” –– Hermann Thieken, Chair of AG Kino

This is a true story of a couple who hitchhiked nearly 100,000 km during three and a half years of life on the road. Setting out from Freiburg, Germany, Patrick and Gwendolin traveled around the world without airplanes, hitching rides with anyone who would take them, sleeping in tents, crossing oceans on boats, and trying to spend as little money as possible. All they needed to start was their natural curiosity, and what kept them going was their faith in humanity. Moving through Europe, Muslim central Asia, China, Japan, the US and Central America, they discover that home is truly just a state of mind. The film began as phone videos, brief snapshots of chance encounters from life on the road. As these snapshots accumulate, an amazing and and rich panorama begins to emerge. It’s the great pageant of humankind, shot from the side of the road with a thumb sticking out at the next approaching vehicle. The experiences become richer and deeper, and Patrick and Gwen grow and change with them. As Gwen says, “It’s not a trip, it’s a stage in life where we’re traveling.”