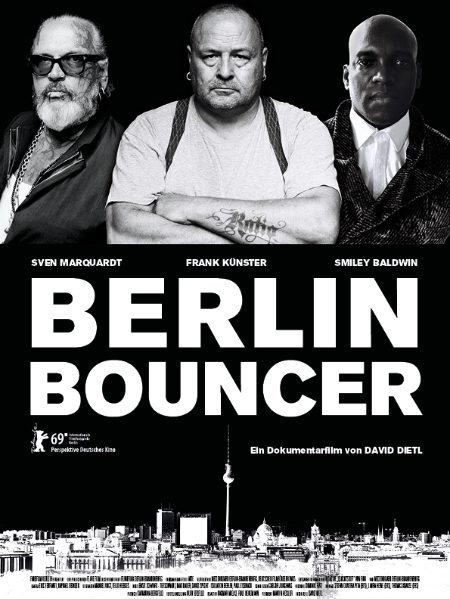 “Get ready for a Berlin story that is unlike any you have heard of, accompanied by the perfect soundtrack and gripping visuals!” –– IHeartBerlin.de

“The story of three of the clubbing mecca’s most famous doormen.” –– Resident Advisor

Berlin Bouncer tells the story of Berlin, from a divided city to the party metropolis of today, through the eyes of the legendary doormen of the city’s even more legendary night clubs. The film focuses on three men: Frank Künster came in the 1980s to study in Berlin; Smiley Baldwin guarded the Berlin Wall as an American GI; and East Berlin-born Sven Marquardt became first a young punk and photographer and then found his way to guarding the door (and the hipness) of Berlin’s hottest techno clubs. As bouncer for Berghain, Marquardt is quite probably the world’s best-known doorman. The film follows the trio from the fall of the Berlin Wall up through the nightclub explosion of the 1990s, 2000s and up to the present day. They tell the stories of famed clubs including Berghain, Delicious Doughnuts and King Size and the larger story of one of the most storied nightlife scenes in the world today. The film is quite fittingly accompanied by a soundtrack of pumping club sounds and intense visuals.