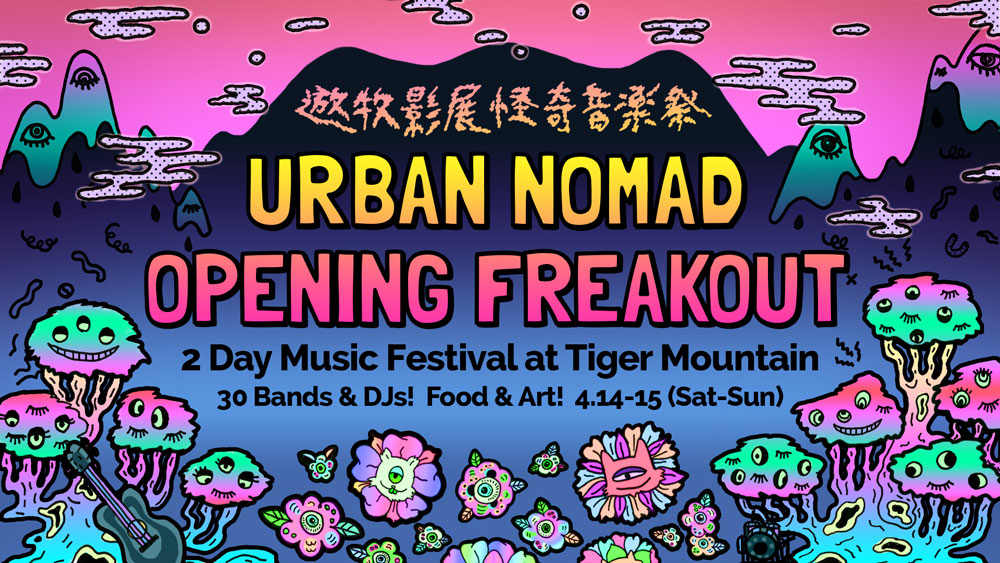 For 2018, the Urban Nomad Opening Freakout will be held on April 14 and 15 (Sat & Sun) at Taipei’s best outdoor music venue, Tiger Mountain, a green mountain valley only a 10-minute taxi ride from Taipei 101. There will also be a warm-up party before the festival, a late-night afterparty on April 14, and more fun events. Stay tuned for details!

The lineup will consist of more than 30 bands and DJs playing on two main stages, plus amazing food, beer, a pop-up vinyl DJ stage, art installations and booths, circus performers and new surprises!

Major musical themes for 2018 will include 1) garage rock & neo-psychedelia, 2) funk, reggae and world music, and 3) DJs and live electronic acts playing an underground dance party inside an old Taoist Temple.

This party began in 2008 as an opening party for the Urban Nomad Film Fest, which has for more than a decade invited the best, weirdest and most outrageous underground and indie musical acts that can be found. Highlights include I.U.D. (feat Liz Bougatsos of Gang Gang Dance) for the Video Mindfuck Party, Trippple Nippples, Mop of Head, Kinoco Hotel, Autopsy for a Drowned Shrimp and many more. Since 2015, Urban Nomad’s opening party has grown to become its own event, an outdoor music festival that kicks off the Urban Nomad spring season — the Urban Nomad Opening Freakout!

If your band has a music video from 2017-18, enter the Urban Nomad Taiwan Music Video competition to win a cash prize of $10,000. The prize winner will be announced on the main stage of the Urban Nomad Opening Freakout on April 15.