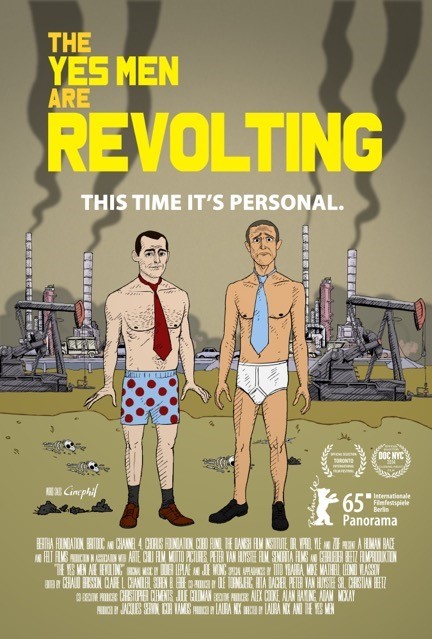 As an activist group, the Yes Men invented a new type of activism, in which they impersonate spokespeople from the worlds of business or government in order to tell the truth — about industrial accidents, fraud and all sorts of crimes that business commit against ordinary people. Through 20 years of activism and filmmaking, they have established themselvs as masters of the corporate hoax, and though they fight an impossible battle, they always fight it from the moral high ground. In this, their third film, the Yes Men are back at it. The target now is their most ambitious yet — global warming. The film follows them through fake press conferences and legal threats, and also into their personal lives, where they try to balance activism, family life — the greater good and life as a contemporary individual.

Note: Urban Nomad collaborated previously with the Yes Men in 2008, for screenings and actioins at the 2008 Taipei Biennial. In one scene in this film, watch out for Yes Man Mike Bonanno wearing an Urban Nomad t-shirt!

“Prepare to sit on the edge of your seat.”