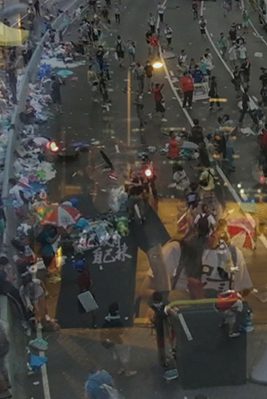 This program includes three films from Taiwan and Hong Kong, with total length of 84 minutes.

Following Hong Kong’s Umbrella Protest movement and Taiwan’s Sunflower Movement, the fight for popular democracy continues in both places. Filmmakers continue to look back on those wellspring protests and how they continue to develop and shape society.

This documentary short looks back on the recent development of Hong Kong’s social movements from the new perspective created by the 2014 Umbrella Movement. The protagonist, Lok, starts out in 2010 by broadcasting pro-democracy political views on underground radio. His story then develops to the Occupy Central protests and beyond. The film itself is a cinematic thesis analyzing the organizational problems, which deeply affect Hong Kong’s social movements from the perspective of a social movement organizer.

All clothes have a story to tell. Ma is about to close the Angela laundry shop when Sham arrives. He’s a young man with a head injury and handful of dirty clothes from living on the street during the Umbrella Movement. The older lady and the young man begin to talk. At first they argue, but as they talk, they also begin to understand one another.

This documentary short looks at the mercurial political career of Sunflower protest leader Chen Wei-ting. He rose as a political star as a student leader occupying Taiwan’s legislature in 2014, then fell into disgrace within less than a year. Following the Sunflower Movement, Chen decided to run for the legislative by-election in Miaoli, his hometown. Many had high hopes, however, just seventeen days after his election campaign began, it came to an abrupt halt due to a sexual harassment scandal. His public persona was shattered, and the scandal also affected people’s views of the movement he once led. This film asks, what was Chen he thinking? And after having lost his godlike status, how do others now feel about him?