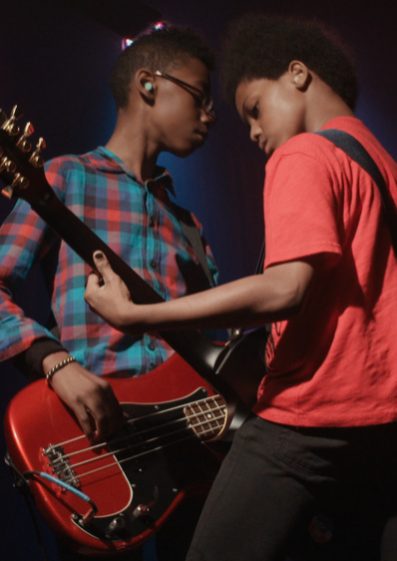 The speed-metal band Unlocking the Truth was started by three African-American 7th graders living in the suburbs of New York. After a video of the band busking in Times Square goes viral, they find themselves in Los Angeles, signing a USD 1.8 million record contract with Sony Music and gaining a 70-year-old Jewish industry veteran as agent and manager. They are still just 14 years old.

The documentary follows the three boys — guitarist Malcolm Brickhouse, bassist Alec Atkins and drummer Jarad Dawkins — step for step as these massive life changes unfold. They go from being kids on the playground to potential superstars with handlers, marketing teams and all the extreme fakery of the music biz. It’s a story not just of kids thrust into an adult world, but of the music industry’s extreme desperation to produce new commercially viable acts. Yes, things have really gotten as bad as this.

“It’s a charming and engaging mix – the antithesis of Metallica’s ego overload, and just as watchable.”