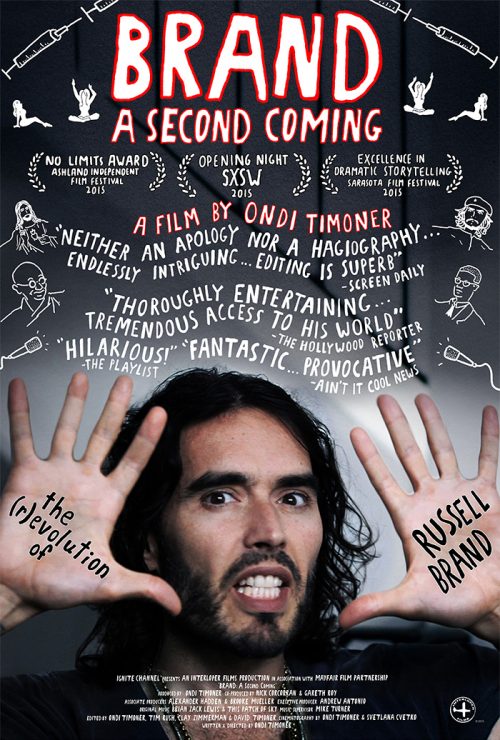 British comedian Russel Brand — star of Get Him to the Greek and former husband of Katy Perry — has gone from a drug addicted superstar to a cleaned-up political revolutionary. Now he’s calling for a complete political revolution and at the same time comparing himself to Jesus, Ghandi and Malcolm X. He may be joking, but no one is sure how much.

Brand’s incredible ego trip of a life is presented in this documentary by two-time Sundance Grand Jury prize-winning director Ondi Timoner. A master storyteller with an uncensored and hilarious subject, Timoner shows us a laugh-out-loud portrait of Brand, where we are left to decide for ourselves whether he is merely an ingenious clown or an actual prophet who’s tirades will one bring down global capitalism.

The film was possibly too true-to-life for Brand, who disowned it last year at the London premier in an ugly beak with the director, and has since produced a second auto-bio-doc he co-directed with Michael Winterbottom. This film, however, is “the Russel Brand doc to watch,” according to Indiewire (and others). Whether you’re a fan of Brand in particular, or are simply fascinated by displays of extreme narcisism, you will be highly entertained.

“Neither an apology nor a hagiography… endlessly intriguing”

“It’s very hard not to like Timoner’s brilliant documentary… It had us in stitches… Cleverly edited, well-constructed and as hilarious as a Russell Brand documentary should be.”