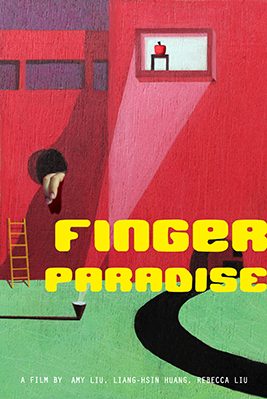 Moms, sometimes it’s a Freudian thing, but not always. The thread running through this program is women, fertility, mothers, daughters and lovers. This program is about the yin, not the yang.

Animated short: A millipede releases a multitude of eggs, a crowd of fish swim into a wild wonderland. A series of organic forms made of tie-dyed fabric move through the grand cycle of life.

At a time when print media is changing to digital media, this documentary short follows Mrs. Chang, a newspaper delivery person who is raising two daughters. Rain or shine, she delivers newspapers all year round. It keeps her busy and provides income in her semi-retirement, but at the same time allows her to witness the newspaper’s dramatic change in vitality.

Animated short. A girl’s fear of her mother’s disease makes their relationship uncertain. They are close yet sometimes so far away from each other, as if playing hide and seek.

Narrative short: Please, Thanks, Sorry.Sometimes being too polite in a relationship can be cruel to the other person. On this particular afternoon, a girl who has always been polite decides to break her rules….

Animated short: Emerging from the base of a chopped-down tree, a little tree spirit drags his luggage to another still-living tree for shelter. There he meets an innocent young girl. Together, one human being and one tree spirit, sit side-by-side on a branch and silently witness the aftermath of a tree massacre.

Pan Zhog means “outdoor banquet” in Hakka, and these banquets are used to mark funerals, weddings and other celebrations. Blurring the line between fiction and non-fiction, Pan Zhog is a sentimental short film about saying goodbye. For decaddes, Mori-so and Gim have been neighbors, friends and partners in a Pan Zhog catering business. One day Mori-so gets a midnight phone telling her of her best friend’s death. So she decides to cater a banquet for Gim in the way she was most familiar with.