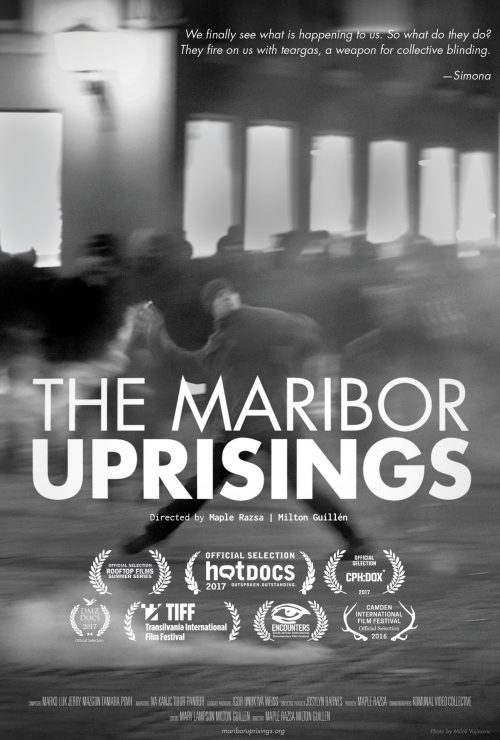 In the once-prosperous industrial city of Maribor, Slovenia, anger over political corruption turns into unruly revolt. This participatory documentary places audiences in the midst of the third and largest uprising as crowds surround and ransack City Hall under a hailstorm of tear gas canisters. The directors invite audiences to engage with the protestors through an unusual and participatory form. At certain points in the film, the audience will be required to make their own choices about which cameras they will follow and therefore how they will participate. Like those who joined the actual uprisings, audiences in the theater must decide whether to listen to organizers and remain with those committed to nonviolent protest on Freedom Square, or to follow rowdy crowds toward City Hall and almost certain conflict. The Maribor Uprisings takes up urgent questions raised by uprisings elsewhere, from the Arab Spring, through Paris, to Black Lives Matter. What sparks such popular outrage? How are participants swept up in—and then changed by—confrontations with police? Could something like this happen in your city?

“In an age where protest footage is livestreamed and instant on social media, the filmmakers have managed to take footage of demonstrations from 2012 and make it feel as if you are experiencing it in the actuality of the current moment. ” –– Rooftop Films

“The film meaningfully demonstrates that the line between ‘peaceful and violent’ or ‘good and bad’ protesters is, in actuality, very fine indeed, and that these dichotomies, created after the fact, often serve to divide protesters who share common cause.” –– POV Magazine