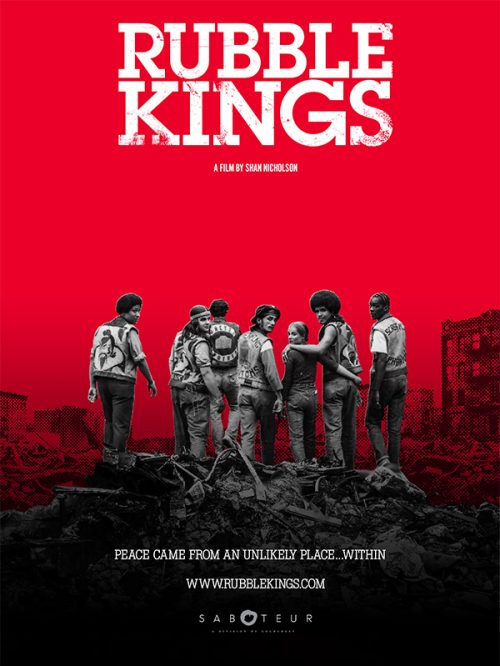 Rubble Kings tells the story of New York street gangs in the late 1960s and early 1970s, especially in the un-policeable South Bronx, where cops once found a dead, skinned gorilla in a vacant apartment building, only to shrug and say, “Only in the Bronx.” The gangs took names like the Savage Nomads, Black Assassins, Harlem Turks and Peuro Rican Ghetto Brothers and wore these ferocious logos as giant emblems on their jackets. They fought and killed each other in the streets, but just as the Bronx was headed to a ghetto armaggedon, they also took it upon themselves to broker peace treaties amongst themselves. It was not easy going, but they found a solution in the power of music. Block parties were born, and with it hip hop culture.

This documentary is based on numerous interviews with older, reformed gang members, including Afrika Bambaataa. Once a member of the the Young Spades, Bambaataa, together with DJ Kool Herc, went on to transform his gang into the Universal Zulu Nation, a group that has now promoted neighborhood peace and hip hop culture for more than 40 years.

“A fascinating, valuable work of social, music and New York history, a celebration of a peaceful revolution by those who helped birth it.”

“Rubble Kings is the rare movie I actually wished were longer.”