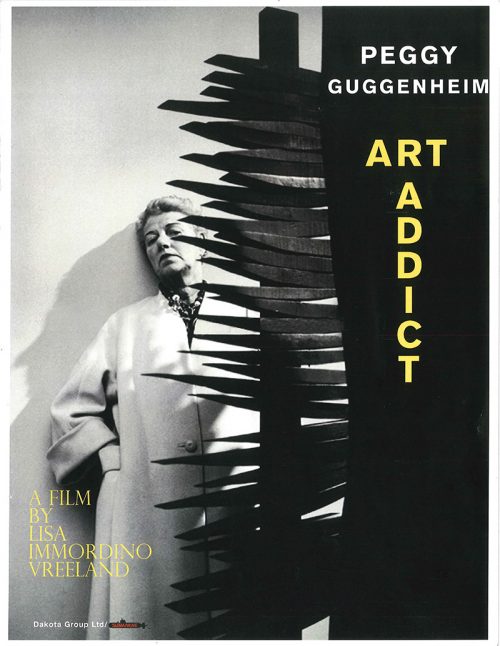 It is no longer widely known that Peggy Guggenheim was something of a black sheep in the Guggenheim family. It was her uncle, Solomon Guggenheim, who built the famous New York Museum, but Peggy sat on the other side of the lineage. Without access to vast fortune, she collected by her keen eye and social instinct. In the process, she befriended the greats of 20th century modern art, buying Picasso early at the outbreak of World War II, lapping up the theory of Marcel Duchamp, and later championing abstract expressionists like Mark Rothko and Jackson Pollock. She was also a woman ahead of her time. She was sexually liberated, taking a string of lovers, many of them the artists she collected. She had cosmetic surgery, far before it became common. This documentary by Lisa Vreeland (granddaughter-in-law of the famed Vogue editor Diana Vreeland) is based on the last interview Peggy ever gave, a recording that was presumed lost. It paints Peggy as a modern/ist woman with her own sexuality, one who, within the context of the era, forged a wonderful autonomy. Her phenomenal collection of art — now housed in a palazzo bearing her name in Venice — is presented as a manifestation of this new modern attitude, not just a bunch of expensive paintings she was saavy enough to buy for cheap.

“The career of socialite, collector, patron and salonnière Peggy Guggenheim must be the most mind-bogglingly eventful in the history of 20th-century art….I was on the edge of my seat.”

“By her own legendary admission, Guggenheim had thousands of lovers and pursued art and sex in equal measure.”

— The Globe and Mail