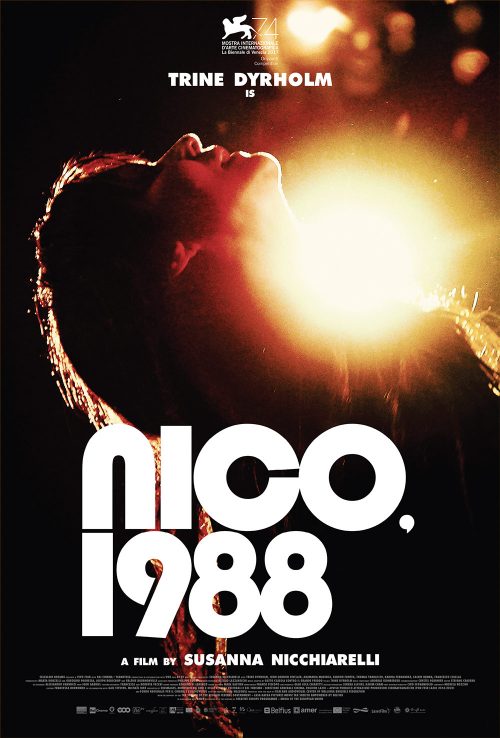 One of Andy Warhol’s muses, a singer of The Velvet Underground and a woman of legendary beauty who has been called the “original goth girl”, Nico lived a second life after these glamorous first chapters, when she began her career as a solo artist. This film is set between Paris, Prague, Nuremberg, Manchester, the Polish countryside and the Roman seaside. It is a road-movie dedicated to the last years of Christa Päffgen, a.k.a. Nico, played by award-winning Danish actress Trine Dyrholm (Best Actress at the 2016 Berlin Film Festival). It’s the story of Nico’s last tours with the band that accompanied her around Europe in the Eighties: years in which the “priestess of darkness”, as she was called, found herself again, shaking off the weight of her beauty and rebuilding the relationship with her only forgotten son. It is the story of a rebirth, of an artist, of a mother, of the woman beyond the icon.

Nico is mentioned mostly in association with the famous men she slept with or in connection with the Factory-Warhol-Velvet Underground experience, but Nico was and did much more in the years following those experiences. Andy Warhol once said: “she became a fat junkie and disappeared”, but nothing could be less true. I fell in love with Nico also for her wit and irony and I have tried to tell her story with the necessary distance and the absence of dramatic sentimentalisms, in a way I think, or hope, she herself would have told it. In writing and lming I always tried to keep the right distance and respect that I believe is due when dealing with a true story.

Nico’s story is the story of an uncompromising artist who nds satisfaction in her art only after having lost most of her fans; of one the most beautiful women in the world who nally becomes happy when she gets rid of her beauty. I wanted to make a movie about this, about the woman Nico was behind the image that most people have of her, behind the icon: beyond “Nico”, her stage name, the real Christa. And with her story I wanted to tell the story of many other women, because Nico’s parable, though dramatically extreme, contains many of the dif culties that a woman and artist and mother goes through with maturity.