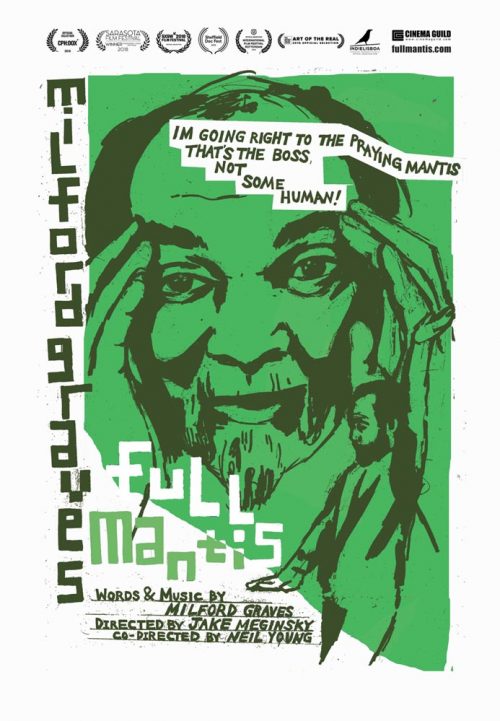 “A jazz movie in every sense of the word” –– Village Voice

“You can get a lot of facts about Mr. Graves and his discography on the internet (and I recommend you do). This movie gives you, well, the man’s heart, and it’s a beautiful one.” –– New York Times

Percussionist Milford Graves is widely considered to be a founding pioneer in the early 1960s of avant-garde jazz or free jazz. He performed alongside the greats of that scene –– Pharoah Sanders, Albert Ayler, John Zorn –– promoting the use of irregular rhythms and helping to free drumming from the function of merely keeping time. He remains one of the most influential living figures of that era.

This film, which is as avant-garde and “jazz” as its subject, draws the viewer through the Graves’ lush garden, ornate home, the martial arts dojo in his backyard, and the laboratory in his basement –– all of this just blocks from where he grew up in the housing projects for South Jamaica, Queens. You will see Graves activate an electronic stethoscopes to digitally process the sound of his heart. You will travel with him to Japan to perform at a school for children with autism, igniting the student body into an ecstatic display of spontaneous collective energy. As you see these things, you will come to understand how Graves has redefined the fundamental essence of music, and how he has laid bare the connection between rhythm and the life itself.