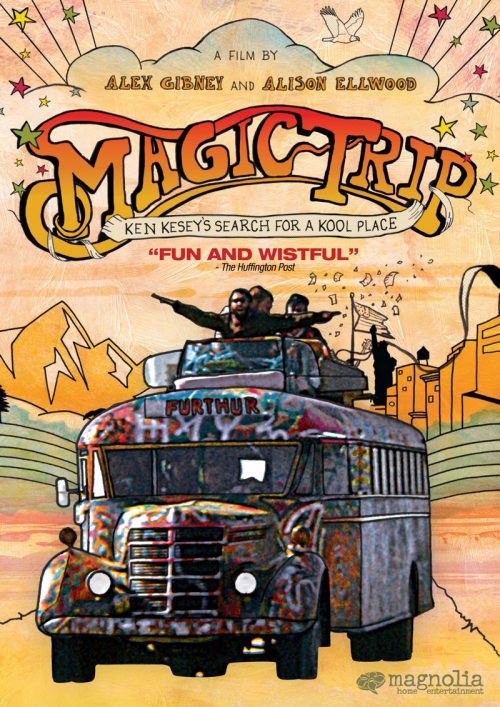 “Return to the psychedelic ‘60s in this documentary featuring long-lost footage of Ken Kesey and his Merry Pranksters.” –– Hollywood Reporter

“What a long, strange trip it’s been” –– The Grateful Dead

In 1964, Ken Kesey, the famed author of “One Flew Over the Cuckoo’s Nest,” set off on a legendary, LSD-fuelled cross-country road trip to the New York World’s Fair. He was joined by “The Merry Band of Pranksters,” a renegade group of counterculture truth-seekers, including Neal Cassady, the American icon immortalized in Jack Kerouac’s “On the Road,” and the driver and painter of the psychedelic Magic Bus. Kesey and the Pranksters intended to make a documentary about their trip, shooting footage on 16MM, but the film was never finished and the footage has remained virtually unseen. The bus journey was however immortalized by Thomas Wolf in his novel “The Electric Kool-Aid Acid Test.”

With Magic Trip, Oscar-winning director Alex Gibney and Alison Ellwood were given unprecedented access to this raw footage by the Kesey family. They worked with the Film Foundation, HISTORY Channel and the UCLA Film Archives to restore over 100 hours of film and audiotape, and have shaped an invaluable document of this extraordinary piece of American history. It features Ken Kesey, Timothy Leary, Allen Ginsberg, Jack Kerouac and the Grateful Dead, who immortalized the bus trip with their song “Truckin” and its lyric, “what a long, strange trip it’s been.”