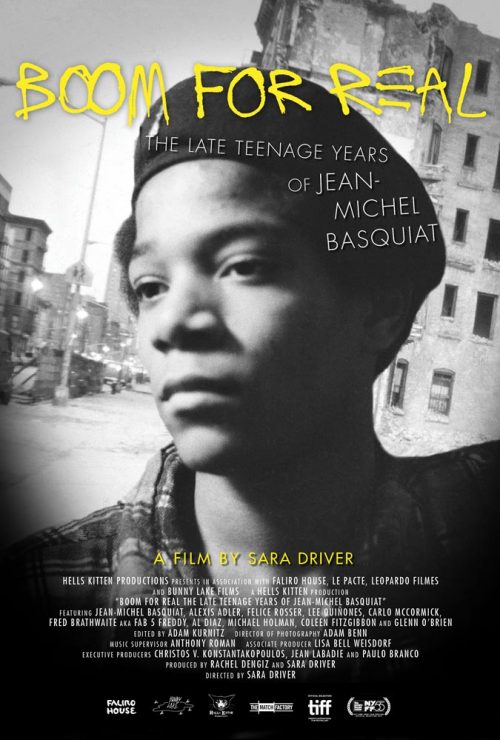 Boom For Real: The Late Teenage Years of Jean-Michel Basquiat

“A Treasure. A transporting doc about the early career of Basquiat and the environment where he flourished. Conveys his personal magnetism, eccentricity and non-stop creativity without romanticizing him.” –– The Hollywood Reporter

“Vivid and beautifully meditative. It shows how one of the most emblematic American artists of the late 20th century found his voice in the rubble.” –– AV Club

“An unequivocal cause for celebration. Director Sara Driver pays him a proper and enthralling tribute.” –– New York Times

Basquiat and the City of New York, 1978-81. This documentary is hardly the first nostalgia piece for the dirty New York of the late 1970s and its uber-cool downtown crowd of artists and punk rockers. Yet BOOM FOR REAL, by filmmaker Sara Driver, longtime partner of Jim Jarmusch, comes now as one of the best and most artful looks back at that quasi-mythical era, from which so much of contemporary culture emerged.

Basquiat, in this film, is a homeless teenager writing esoteric poetry on walls as graffiti, looking for a place to sleep and girls to sleep with, hanging out at the Mudd Club and Club 57, and painting on clothes, apartment walls, pieces of garbage and everything but canvases that will hang in a gallery. He is a mystery, a kid with a rich inner world that exploded visually on everything he touched, but otherwise –– and this seems to be a fact of his real life –– he never really said much, he just did. The film is a portrait of this silent enigmatic figure and the downtown scene he waltzed through. The East Village, CBGBs, Max’s Kansas City. It draws to a close with his first group exhibitions and essentially ends right as the young artist is about to have his first solo show in a major art gallery. A final postscript tells us that seven years after his first solo exhibition, Basquiat dies. It doesn’t say why. We of course already know. He overdosed on heroin, alluded to earlier in the film as a product of the city and the time, just one of those New York things.

And so the Basquiat of this film is the inchoate artist of the streets who becomes the avatar and channeler of a New York, in which the barriers have collapsed and everything is mixing together: the uptown graffiti scene, the downtown Soho gallery scene, new wave, hip hop, avant-garde filmmakers, Andy Warhol, the parties and clubs, the psychedelics, coke, heroin, and all in the crucible of a dirty, bankrupt, crime and gang-ridden New York. The pastiche of all these things is at once the art of Jean-Michel Basquiat, a powerful portrait of New York at that time, and –– director Sara Driver deserves all the credit here –– this film itself, created out of the heaps of archival footage and photos that weave a wonderful visual texture of this moment in time. The talking head remembrances come from a group that you may have all found partying one night at Tribeca’s Mudd Club: Jarmusch and the downtown artists and critics; or uptown giving birth to hip hop: Fab 5 Freddy, graffiti artists Lee Quinones and Al Diaz (co-creator of the Samo tag). Basquiat may be the object of this film, but he is not necessarily the subject. In reality this film is a love letter to the New York of the late 1970s, when we were all poor, struggling artists.