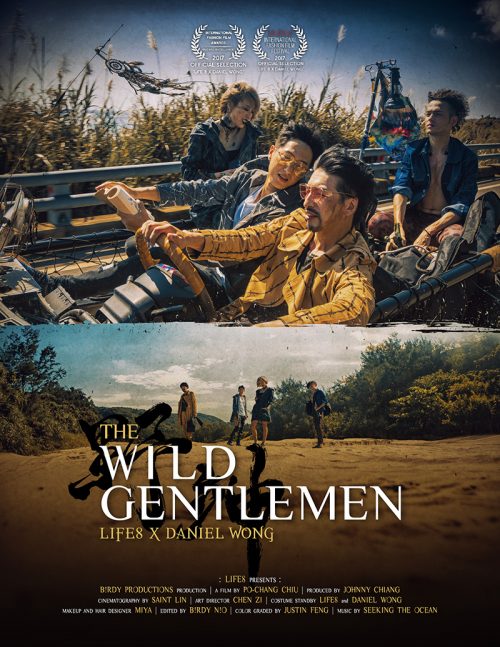 Celestial Lagoon. Impossible cities, eccentric architecture, made up of pieces from other cities, seemingly taken at random…ships, trains, cars, bicycles, pedestrians moving on the streets, squares and streams…A blue sea busy with swimmers. A song that is both sweet and restless, sung by a young girl’s voice, a text that speaks of colors, of their parameters and their meanings…

The explorers wander in the city on their own, passing by places we are familiar with. What we are used to in our daily lives become unique in the world of the explorers. The daring style and undisguised personal attitude are matched with the hustle and bustle of the traditional market, the busy lanes and alleys in the city, the crosswalk and traffic lights, the tranquility of the Taiwanese temple and etc. In those scenes, the appearance of the explorers seems so odd yet so glamorous.

The Patriot Lottery was a rags to riches dream of early Taiwanese, pictures and slogans onthe lottery ticket was filled with political agenda and function to educate them on model living standards. The artist of the tickets’ pictures, Lin Qing Xiong was kidnapped thrice and asked about the plaque. He uttered nonsense concerning a dream and plaque which miraculously became a winning ticket of the next day, and this event had stayed as an special part of a memory in his life.

The puppets represent the Puppet Master’s inner thoughts. His puppets are his life. So when he faces a dilemma, he expresses himself, his questions, his problems, through his puppets. That is why we want to reinforce the impression of intimacy with the lights. It’s like we’re inside a cocoon, inside his head. For that matter, I observed that puppets can be very expressive, and can carry feelings, with very simple movements (a nod of their head, a hand raising, etc.).

In 2014, after the 9-in-1 elections, the vocal of the band Armed Youth, A-Da, found out that the young people who stood for “Go home and vote” all went back to the city. Still elders stay in the poor hometown. At that day, he made a decision. “Just live in where you born, let the music be composed by the land you step on”. In Re:home, On the journey of A-Da led the band Armed Youth went back to the hometown, they tried to figure out how to define Taiwanese music? What is the root of Taiwan? What is the culture of this country? All you need just to start living in the local life, and let the rock music rebuilt its stylish.